You may remember bag-in-box wine from your student days, a summer festival, or perhaps as something you hurry past on the supermarket shelves. Box wine has a stigma of being poor quality wine, for teens or binge drinkers and something that’s bought because it’s cheap.

But perhaps that’s all about to change. Wine in a box is making a comeback and one of the main reasons is its environmental and economic benefits.

A blast from the past and a new trend

Wine in a box has been around a long time. It was invented and popularized by the Aussies (who also popularized the idea of screw caps instead of corks).

The wine is contained in a bag with an air-tight plastic tap welded into it. The bag of wine is then placed in a box that has a hole cut for the tap to poke through. The original bag in a box concept was originally patented in 1935 by Denmark, a winery in South Australia. In 1967 another Australian inventor patented the plastic tap dispenser.

Despite being around for many years, box wine has always been looked down upon by high-end winemakers and wine drinkers alike. But, as with so many aspects of modern culture, what was once old and tacky is now cool and trendy. The hipsters are bringing box wine into the limelight and giving it a chance to flourish.

One of the primary reasons for this trend is the environmental and cost benefits of producing, transporting, storing, and consuming wine from a bag in a box.

Glass bottles are heavy and cost a lot per milliliter to transport. Not only is transporting a heavy material like glass more costly in money terms, it’s also more costly to the environment.

An article in the NY Times outlines the benefit of switching from glass to cardboard from a carbon emissions point of view:

The air-tight seal between the tap and bag means that wine in a box can be stored for weeks once opened without the taste being affected whereas wine from a bottle should ideally be consumed within a matter of hours or days.

Once opened, wine doesn’t tend to last more than a day or two in my house, but the idea of being able to keep a 3 liter box of white or rosé in the fridge and pouring (or cooking with) the occasional glass as needed sounds ideal.

Instead of finishing off a bottle to prevent it from going to waste, having the ability to store wine in the box for weeks could lead to drinking less.

If the environmental benefits don’t have you convinced then perhaps the economical benefits will. As packaging goes, glass is significantly more expensive to use than a box.

Yes, it can be reused and recycled but if winemakers don’t have to pay for glass, they can reduce the cost of their product and pass on the savings to consumers. Even if producers keep a higher margin, the consumer can still benefit if winemakers invest in better equipment and improve the quality of their wine.

The Future of Bag in Box Wine

Based on a number of sightings of the bag in box wine (referred to as BIB in an attempt to shake the bad reputation), it definitely seems to be on the rise in London.

Whether this is indicative of a more global trend is still yet to be seen.

But there seems no reason why BIB wine shouldn’t flourish in this age of environmental awareness and economic uncertainty. If nothing else, it’s great to support the local producers who are making their products available at a more affordable price without compromising on quality.

So, is box wine the future of all wine? Almost certainly not – at least not in 100% of cases.

There’s a lot of history and still a fair amount of snobbery tradition in the wine industry. Wine is a complex business and not one that’s particularly open to change – remember how hard it was to convince people about screwcaps?

But fundamentally, BIB wine is best suited to wine that’s to be consumed as purchased rather than something to be laid down and aged for years in a cellar.

So next time you’re at the local wine bar or gastropub, keep an eye out for box wine and let us know what you’re drinking! 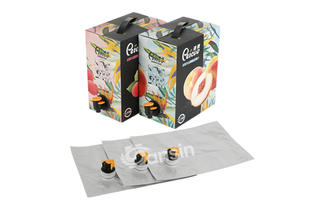