What are the characteristics and uses of bag-in-box?

A bag-in-box or BiB is a container for the storage and transportation of liquids.It consists of a strong bladder (or plastic bag), usually made of several layers of metallised film or other plastics, seated inside a corrugated fiberboard box.

The bag is supplied to the company which will fill it as an empty pre-made bag. The company filling the bag with its product generally removes the tap, fills the bag (with wine, juice or other liquid) and replaces the tap and then the bag is placed in the box.

The bags are available as singles for semi-automatic machines or as web bags, where the bags have perforations between each one. These are used on automated filling systems where the bag is separated on line either before the bag is automatically filled or after. Depending on the end use, there are a number of options that can be used on the bag instead of the tap. The bags can be filled from chilled product temperatures up to 85 °C (185 °F).

BiB packaging can be made using form seal fill (FSF) technology, where the bags are manufactured on-line from reels of film, then the FlexTap is inserted then filled on an integral rotary head filler. The BiB is currently used to package wine, soda fountain syrup products, milk, liquid chemicals, and water. 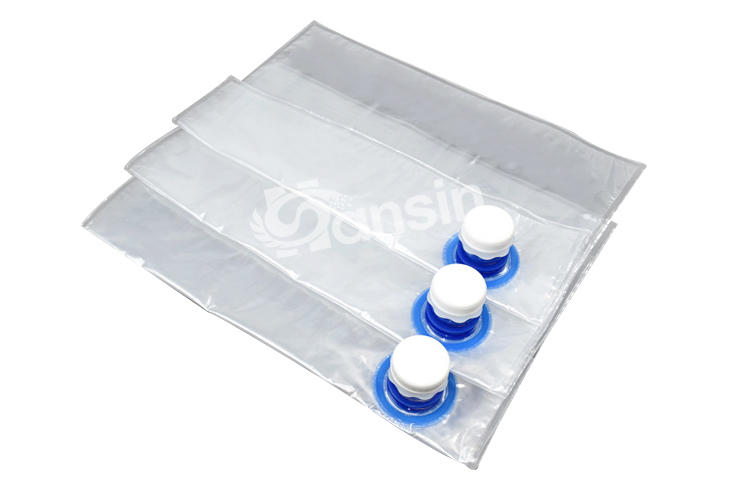 BiB has many common commercial applications. One of the most common commercial uses is to supply syrup to soft drink fountains and to dispense bulk supplied condiments such as ketchup or mustard in the foodservice industry specifically in fast food outlets. BiB technology is still used for its original application of dispensing sulfuric acid for filling lead-acid batteries in garages and dealerships. As explained further below, BiBs have also been implemented for consumer applications like boxed wine.

For commercial syrup applications, the customer opens one end of the box (sometimes via a pre-scored opening) and connects a compatible connector to fitment on the bag to pump out its contents. The fitment itself contains a one-way valve which opens only with pressure from the attached connector and which prevents contamination of the syrup in the bag. For consumer applications like boxed wine, there is a tap already present on the bag, so all the consumer has to do is locate the tap on the outside of the box.

Producers like Transparent bag-in-box packaging because it is inexpensive. BiB also offers environmental benefits by allowing contents of 1.5–1000 liters, so that less packaging or labeling is required. The material it is made from is lighter than the other plastic alternatives, providing it with a better carbon footprint.

The 'wine cask' was invented by Thomas Angove (1918–2010)of Angove's, a winemaker from Renmark, South Australia, and patented by the company on April 20, 1965. Polyethylene bladders of 1 gallon (4.5 litres) were put into corrugated boxes for sale to consumers. An original design required that the consumer cut the corner off the bladder inside the box, pour out the desired quantity of wine and then reseal it with a special peg.

In 1967, Charles Malpas and Penfolds Wines patented a plastic, air-tight tap welded into an aluminised film bladder, making storage much more convenient for consumers.All modern wine casks now utilise some sort of plastic tap, which is exposed by tearing away a perforated panel on the box.

The main advantage of BiB packaging is that it prevents oxidation of the wine during dispensing. Rather than working as a conventional tap, the bladder uses gravity pressure to squeeze the liquid out of the bladder, whereas a conventional barrel tap works by allowing incoming air to displace the contents. After opening wine in a bottle, it is oxidized by air in the bottle which has displaced the wine poured; wine in a bag is not touched by air and thus not subject to oxidation until it is dispensed. Cask wine is not subject to cork taint or spoilage due to slow consumption after opening.

Although a promising technology, there have been production and design problems. The impermeable bladders tend to delaminate around the tap and where the two halves are joined. If tap components are deposited in the bladder during assembly, all the bladders must be destroyed to find the components as the bladders are opaque. It has also been difficult to manufacture taps that do not leak air into the bladder since tap parts usually do not join neatly, although there have been significant improvements. Most red wines require breathing before consumption which is not possible with casks, so the wine has air circulated through it before bottling (usually by running through a centrifuge), which reduces shelf life considerably. Most casks will have a best-before date stamped. As a result, it is not intended for cellaring and should be consumed within the prescribed period.

The key to this unique system is that the product being filled is not exposed to the external environment at any stage during the process and as such, there is no possibility of a bacterial load being added to the product during the filling process. To ensure there is no contamination from the packaging, the bag is irradiated after the bag manufacturing process.

These packs are typically from 10 to 1200 liters and offer the advantage of cheap, disposable and transport efficient packaging.